When you see this, this is not about songs relating to rainbows. For those familiar with famous Deep Purple guitarist Ritchie Blackmore, you'll know that when he left Deep Purple, he had formed a band called Ritchie Blackmore's Rainbow or simply Rainbow. The band specialized in playing something called neoclassical metal. For those unfamiliar with the term, "neoclassical metal" is a subgenre of metal music that combines elements from speed metal music and classical music.

The only reason Ritchie Blackmore left Deep Purple is because he was incredibly unsatisfied with the heavy funk/soul vibe that the music was taking, probably no thanks in part to vocalist David Coverdale and bassist/backing singer Glenn Hughes both preferring blues, soul, funk over hard rock.

For the major Rainbow fans out there, here are the Top 10 Rainbow Songs, according to Ultimate Classic Rock. 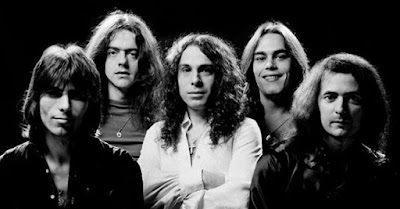 10
Since You've Been Gone
-Down to Earth (1979)
-This song is from the relatively short-lived era of Graham Bonnet. This had gained Rainbow some new fans who had become enamored of the more commercial hard rock sound

8
Tarot Woman
-Rising (1976)
-Rising is said to be, to this day, one of their better albums. This track in particular is known for its sweeping synthesizer intro.

7
Catch the Rainbow
-Ritchie Blackmore's Rainbow (1975)
-This band introduced neoclassical metal as we now know it. This is the very origin of the band we know as Rainbow. This album was chock full of hard rocking, almost head-banging tracks, with the help of Ronnie James Dio and his backing band Elf. This would be the album that set the tone for Rainbow, preferably before the dungeons and dragons come in

6
A Light in the Black
-Rising (1976)
-Rising seems to be making some serious appearances here. This song can be classified in so many terms, but the one that seems to come to mind for some is challenging. With Dio wailing like a banshee on the loose, bassist Jimmy Bain and drummer Cozy Powell in rhythmic harmony, to guitarist Blackmore and keyboardist Tony Carey dueling away, this song is just a total head banger, something that would not seem out of place with Deep Purple

5
Spotlight Kid
-Difficult to Cure (1981)
-For one thing, a lot of people are probably amused by the cover of this album. The band is hardly recognizable in green medical scrubs. This is the third and final song for American vocalist Joe Lynn Turner.

4
Kill the King
-Long Live Rock 'N Roll (1978)
-This could be classified as speed metal. The lyrics pertaining to regicide, Dio's banshee vocals, Blackmore's breakneck guitar playing, this song will leave you just as breathless as the members of the band who play it

3
Man on the Silver Mountain
-Ritchie Blackmore's Rainbow (1975)
-With Dio on vocals, it's almost inevitable that you're going to have fantasy-based lyrics, lyrics pertaining to dungeons, dragons, nubile maidens, etc. This song is a regular heavy metal steamroller with its heavy guitar riffs. This song would even follow Dio to the end-being etched on his headstone

2
Gates of Babylon
-Long Live Rock 'N Roll (1978)
-This song is a great combo of Blackmore's love of classical, Bach-inspired music and Eastern-style music. Fusing these two genres together in a heavy metal mashup is what created this song.

1
Stargazer
-Rising (1976)
-Essentially, this song gave birth to the genre known as symphonic metal, which is a genre of metal fusing the calm beauty of symphony music with the aggressive edge of metal. According to Ultimate Classic Rock, the people there consider this to be the #1 Rainbow song. But I'm sure that a lot of Rainbow fans differ very heavily on what they think is the #1 song.
Posted by HippieGirl at 1:18 PM