http://en.wikipedia.org/wiki/Scooby-Doo
﻿﻿
-American made cartoon produced in 1969 to the present day.
-The original series was titled Scooby Doo, Where Are You?
-Made by Hanna-Barbera
-This was originally a Saturday morning cartoon featuring a talking Great Dane named Scooby Doo and 4 teens who make up something called Mystery Inc, which consists of Fred Jones, Daphne Blake, Velma Dinkley, and Norville 'Shaggy' Rogers. They investigate crimes by supposedly supernatural creatures and in the end they expose them as people.
-And the funny thing is that in every episode, the person behind the crime they investigate ends up being someone they initially meet in the beginning who was trying to help.
-From 1988-1991, there was a cartoon called a Pup Named Scooby Doo. This wasn't too bad. I liked this one and sadly enough, if it's still on, I watch it.

Creation and Development
-This cartoon was written by 2 head writers at Hanna-Barbera named Joe Ruby and Ken Spears, and strangely enough, the person who drew the characters and designed them was a Japanese-American animator named Iwao Takamoto. Their original idea was that it would be called Mystery 5, and feature 5 teens: Geoff, Mike, Kelly, Linda, her brother W.W. and their dog Too Much, who were all members of a band called Mysteries 5 and when they weren't doing gigs, they were dolving mysteries.
-They came up with the idea that the dog would be a large dog who was scared of his own shadow or a small feisty dog. They had the choice of either a large goofy German Shepherd or a shaggy sheepdog.
-It was finally set as Too Much becoming a Great Dane. They did this to avoid confusion with The Archies, who had a dog named Hot dog.
-When drawing the dog, Takamoto consulted a Great Dane breeder about the features of these dogs, and he proceeded to give the Great Dane for this cartoon a double chin, sloped back, bowed legs.
-When it came to the other people, the character Geoff and Mike were merged into 1 person, later becoming Fred, Kelly was renamed Daphne, Linda called Velma, Shaggy, formerly W.W. and not her brother. Fred Silverman, head CEO at CBS studios was behind most of this and the original title became Who's S-S-Scared? and they came up with the idea to rename the dog Scooby Doo and retitle the cartoon Scooby-Doo, Where Are You?

Original TV run
Scooby-Doo, Where Are You?
Episode Guide

CBS run
-Debuted on Sept. 13, 1969. The pilot episode was titled What a Night for a Knight. This episode started with Shaggy and Sccoby discovering an ancient suit of armor in the driver's seat of a pickup truck. And they deliver it to a local museum. Later on, they investigate in the museum for clues, thinking that the archaeologist who was transporting the suit may be missing and that suit of armor is alive.
-The original voice set was Don Messick as Scooby,Top 40 radio DJ Casey Kasem as Shaggy, Frank Welker as Fred, Nicole Jaffe as Velma, Indira Stefanannia Christopherson as Daphne.
-They arrived to each mystery in a large, brightly colored van called The Mystery Machine, which was decked out in all kinds of bright color. And for some reason, when they unveil the crook behind the crime, they always say the same thing "...And I would have gotten awy with it too if it hadn't been for you meddling kids!" It's always the same and if you watch Scooby enough, you'll know that the person behind the crime ends up being someone they meet in the beginning.
-In 1970-1971, they started using music to play during chase scenes, music called bubblegum pop songs, some of which sounded eerily too similar to the music of The Beatles. 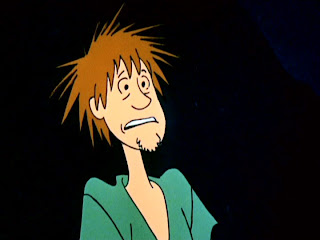 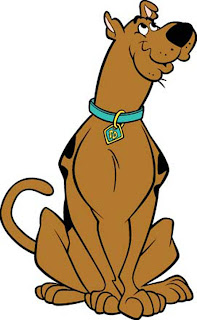 -In 1972, they made 1 hour episodes of a show called The New Scooby Doo Movies, which often featured famous people. These famous people would often have some kind of crime plaguing them somehow and they would help solve the crime.

Later on, there came some new ones, some of them are pretty good.
1.) Scooby-Doo on Zombie Island(1998), which has them going to the Deep South to investigate a haunted plantation
2.) Scooby-Doo and the Alien Invaders(2000), which has them traveling to Arizona and Shaggy and Scooby falling in love with a hippie chick photographer named Crystal and her Golden Retriever dog Amber while investigating alien sighting claims.
3.) Scooby Doo and the Cyber Chase(2001), in which the gang gets zapped into a virtual reality computer game
4.) Scooby-Doo and the Witches's Ghost(1999)

Theatre Films
-In June 2002, the first Scooby Doo movie was made. Being cast as the characters were Sarah Michelle-Gellar as Daphne, Linda Cardellini as Velma, Freddie Prinze Jr. as Fred, Matthew Lillard as Shaggy and a CGI dog for Scooby. In the first movie, they go to a haunted amusement park where they are asked by the manager, Emile Mondavarious to investigate the hauntings and possible possessions of the visiting college students by demons.
-In March 2004, Scooby-Doo 2: Monsters Unleashed was released. In this one, the gang attends the opening of a museum to exhibit all their old enemies, such as the 10,000 Volt Ghost, the Black Knight, the Goo Monster, but a masked figure arrives and steals all of them, including the Pterodactyl Ghost. 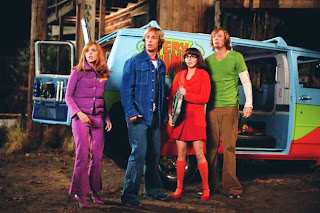 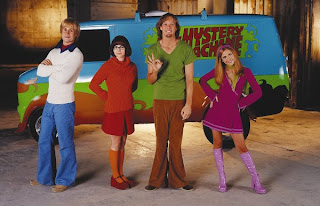 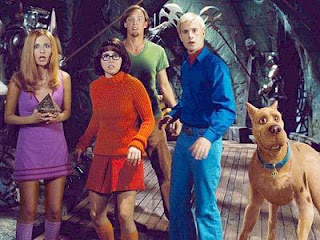 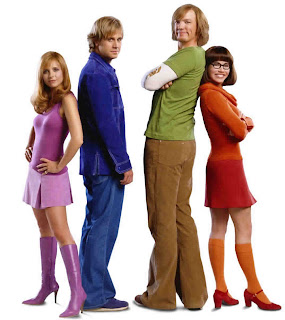 Posted by HippieGirl at 6:50 AM